What Could Be More Natural and More Essential...... 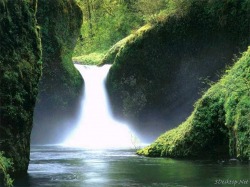 Water makes up about 70% of your body. Three quarters of the planet is covered with it.  Its molecular breakdown is two parts hydrogen to one part oxygen.....H2O
The water that's with us today is the same water that was on the planet millions of years ago...no more, no less.  The problem is that as time goes by we keep getting further from the water that is purely hydrogen and oxygen.
Sources of water contaminants are many, from industrial run off, to seepage from waste sites, storage tanks and landfills, to chemicals used in agriculture, to biological contaminants.      Although we are fortunate in Marin that our water source is mainly rainwater collected in the reservoirs on Mt. Tam, we can not assume that water is as pure as we would like it to be.  Naturally occurring algea in the storage reservoirs, although harmless to humans, can contribute an unpleasant taste to the water.  And with the growing number of pollutants in environment, even rainwater is not as pure as it used to be.  Even chlorine added to water at the municipality can contribute an undesirable taste and odor to the water we drink, however the problem of bacteriological contamination must be dealt with.
In their challenge to provide potable water to consumers in massive quantities, municipalities use many stages of treatment and have to add chemicals to water.  Municipalities in the United States have made a tremendous contribution to our health and well being with the use of chlorine to reduce or eliminate diseases caused by water borne micro-biological contaminants such as cholera, typhoid and amoebic dysentery.  However municipalities have found that chlorine has it's downfalls, and are exploring alternatives to chlorine.  Chlorine evaporates rapidly and does not have much residual effect in killing bacteria, so massive amounts of chlorine need to be used to prevent micro-biological growth throughout the distribution system.
Chlorine may have environmental and other liabilities as well.  It does it's job by bonding with and oxidizing organic compounds.  Oxidation can occur with the proteins and organic matter inside and outside our bodies as well and has been associated with cell damage and reduced cell vitality by many nutritionists.   It also interacts with organics (dead leaves and sediment etc.) in the water to form volatile organic chemicals known as Trihalomethanes (THMs).  Various THMs have been classified by the EPA as possible and probable human carcinogens, and have been associated with bladder and rectal cancer according to studies registered with the EPA and research performed by Dr. Robert Morris of the Medical College of Wisconsin, and others.  For this reason, the EPA has mandated that municipalities eliminate or reduce down to 0.1PPM (part per million) or 100ppb THMs occurring in local water supplies.
Although MMWD's THM count falls well under the current accepted level for THMs, starting March 1995, they will begin using a method called chloramination (combining chlorine and ammonia) in the distribution system, as well as chlorinating at the plant.  Because the chlorine bonds with the ammonia molecules, chloramines will stay in the water longer, and have a better residual effect of killing bacteria further from the plant.  This will allow MMWD to dramatically reduce the amount of chlorine used in the distribution system, which will reduce future occurrences of THM's.
Although chloramination is a move for the better in many regards, it is not without some trade offs.  Chloraminated water may cause fish to die, because fish take water directly into their bloodstream.  Dialysis patients need to use treated water because water comes into direct contact with the bloodstream.
Because chloramines in high doses have been found to cause blood damage and liver damage in laboratory animals, the EPA has capped the allowable usage of chloramines at 4ppm.  Although MMWD's chloramine content will stay well below that level (about 1-2ppm with a maximum of 2ppm), many consumers will be concerned about removal of chloramines and other substances from their drinking water.
With the growing number of ingredients in our drinking water, it may seem impossible to get water back to it's pure state and natural fresh taste.
However....there is a solution that can be found at The Water Store retail outlet and purification plant in Greenbrae.  Through an amazing technology known as reverse osmosis, water is cleaned and polished molecule by molecule, leaving you with only fresh squeezed pure H2O.  As water is forced at 200 pounds of pressure per square inch through a semipermeable membrane, dissolved solids (minerals and metals) and other contaminants are actually repelled away from the surface of the membrane, allowing only pure water molecules and oxygen to pass through (with the exception of a few of the very light weight molecules).  As H2O and oxygen pass through the membrane, the result is similar to that of water tumbling over rocks in a mountain stream; a very fresh taste!
For further protection, the membrane functions as an ultra filtration device, with a pore size of .0005 microns.  To give you an idea of how microscopic that is, a virus would measure in at .02 to .4 microns, or a bacteria at .2 to 1 micron - 2000 times bigger than the pore size of the membrane.
The Water Store purification plant also uses carbon block filtration which complements reverse osmosis in it's ability to adsorb and remove contaminants, such as chlorine and chloramines, that are too low weight, gaseous or small to be repelled or filtered out by the membrane.
Between reverse osmosis, carbon filtration and the other phases of treatment in the plant, you would be hard pressed to find cleaner, better tasting water anywhere, in bottles, or even in rivers, streams, or springs in the Sierras or France!
Reverse osmosis/carbon filtration systems are available for use in the convenience of your home or office.  For the most effective configuration and design for your particular water conditions and needs, come talk to the staff at The Water Store!